By Jolanta Senkova31st August 2018 No Comments 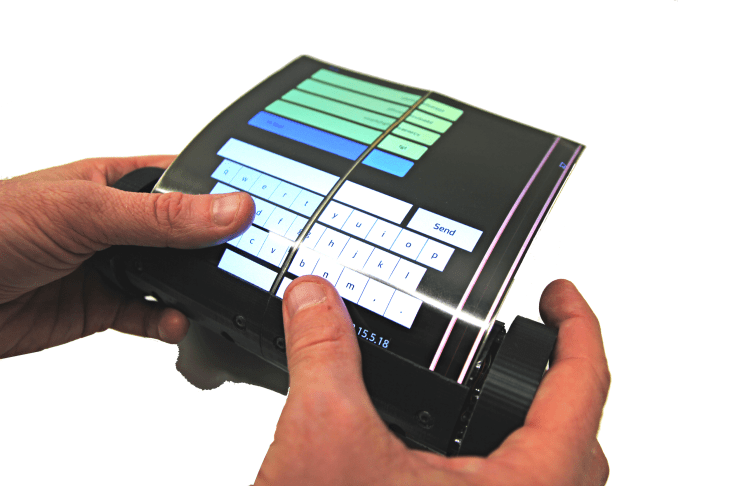 Research scientists have built a prototype touchscreen device which is neither a smartphone nor a tablet, but a combination of both. The product is inspired by ancient papyrus/paper scrolls, and the screen takes a rolled-up, cylindrical form.

The scientists believe that scroll form factor of the product offers a comfortable option for making phone calls too, as the rolled-up scroll can cover your face comfortably.

The advantage of this technology is that it is lightweight as well as being easy to hold with one hand, in contrast to traditional tablet devices, such as iPad. And when its rolled up, it can also fit easily in your pocket.

After months of speculation and uncertainty, Apple has just announced that the next event will be held on September 12th, at the company’s headquarters in Cupertino. Although Apple presented some new iPads in Chicago in Match and updated the MacBook Pro line more recently, they haven’t released any hints on future releases. However, the rumours suggest that Apple is going to release three new iPhones, including an upgraded version of the iPhone X, and possibly a new Apple Watch and iPad Pro will be released too.

Foodsby, a VC backed company, has just raised a $13.5 million Series B led by Piper Jaffray Merchant Banking, with participation by Greycroft Partners, Corazon Capital and Rally Ventures. With the new capital, Foodsby plans to expand from 15 to 25 new markets. It has now totally raised $21 million in total.

The company was founded in 2012 and connects employees in office buildings in 15 cities with local restaurants. And this is how it works: a worker uses Foodsby to pre-order a meal from a restaurant in its network, then Foodsby collects all the orders it received, sends them to the restaurants, and the restaurants then make all the deliveries at once.

Their competitive advantage is that they work only with businesses and have the restaurants make the deliveries rather than having its own delivery agents, and therefore the overall cost of running the operation is lower. Deliveries cost $1.99 per person.

Toyota Motors will invest $500 million in Uber to work together on developing self-driving cars, and joining the highly competitive autonomous driving business. Uber will combine its autonomous driving system with Toyota’s Guardian technology, which offers automated safety features like lane-keeping.

Toyota has invested in research and plans to begin testing self-driving electric cars around 2020.

Where Is My Train is an app that tell you where your train is in real-time, even when you are offline. The app has already been downloaded around 10 million times, which is likely one of the highest figures for apps in this sector. The app is available in 7 regional languages.

Google plans to acquire ‘Where Is My Train’ app for around $30-$40m, while Xiaomi also plans to make a strategic investment in the business.